“You can’t buy your Christmas show NOW! You’ve got 4 weeks of term left!” – I want to shout down the phone.

I don’t, given that that’s not displaying the best business sense ever, but – really?? How’re the kids going to learn the songs? And their lines? When will someone think about the staging? Will there be any direction, or are they just going to stand in one place on stage and read the lines off an autocue?

“Don’t buy our shows and then do them badly!” I roar, in my head. It’s like they don’t get how important this is.

I take the order, gracefully, and sprint with it to the Post Office as if that’ll help.

And I remember those schools, those marvellous schools, that stop all lessons and devote two glorious weeks to the school play and nothing but the school play. Singing, acting, making scenery, making costumes, Musical Theatre Immersion like we’re all in the Kids from Fame.

Yes! I think, probably one of those! As the phone rings again.

And for those of you well into the home straights of your KS2 production – you know, the final nuancing ??  – have a look at our Christmas Songbook: 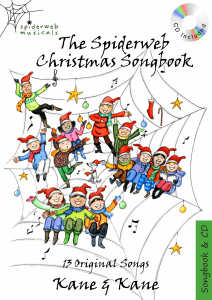 Bring Them To The Manger